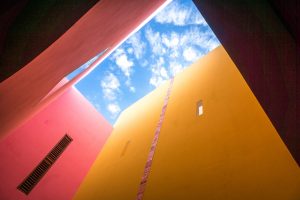 “Beautiful, Sustainable, Together”, the three key words of the new European cultural project launched in January 2021 by Ursula von der Leyen, President of the European Commission, The “New European Bauhaus”. A new social and economic model, a meeting place to design future ways of living with the aim of achieving environmental and social sustainability through the networking of complex and widespread knowledge such as design, architecture, crafts, new technologies and the study of renewable energy.

This model was born from the artistic movement known as The Bauhaus, literally “house of building”, the design school conceived by architect Walter Gropius in Germany from 1919 to 1933. A place where famous architects and artists, including Josef Albers, Wassily Kandinsky, Paul Klee, Adolf Meyer and many others, taught and worked together to create buildings that were functional and at the same time beautiful, in which research, innovation and technology represented the main engine for the development of society. A true German Renaissance of sculptors, paintersand architects with a common objective: to bring the artist closer to the craftsman and to integrate art with life. A project that promotesteamworking, combiningcraftsmanship at the creative level and industry at the productive level, and encourages the artisan to train students, building a community of masters and disciples united in a spirit of collaboration and experimentation of new creative languages.

Once again it is the role of the artist who succeeds in revolutionizing the world, a source of creative rebirth on which even Europe has decided to invest in the coming years to restart and relaunch a more inclusive economy that helps the ecosystems of the planet to revive, and where Art, Culture and Creativity represent an added value and promote the growth of society and the business system by focusing on beauty, sustainability and social and cultural inclusion as concrete tools for the development for our future.